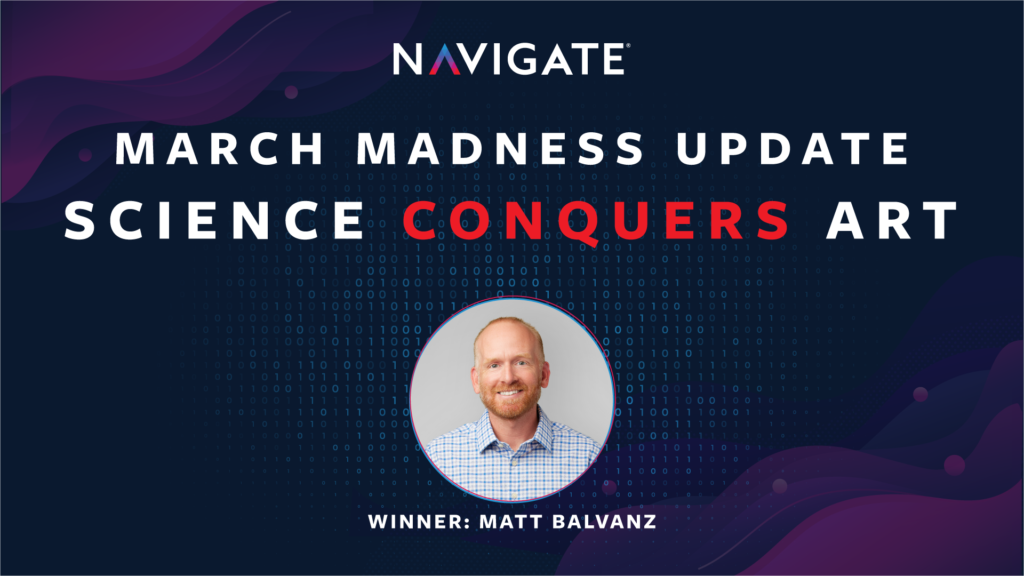 If you missed the explanation of our March Madness Showdown, be sure to check it out for the full methodologies and rules of our competition between Matt Balvanz and Jordan Bloem.

The final tally on points is as follows (our scoring system awarded 1 point for correctly picking games in the first round, and then point values doubled in each subsequent round): 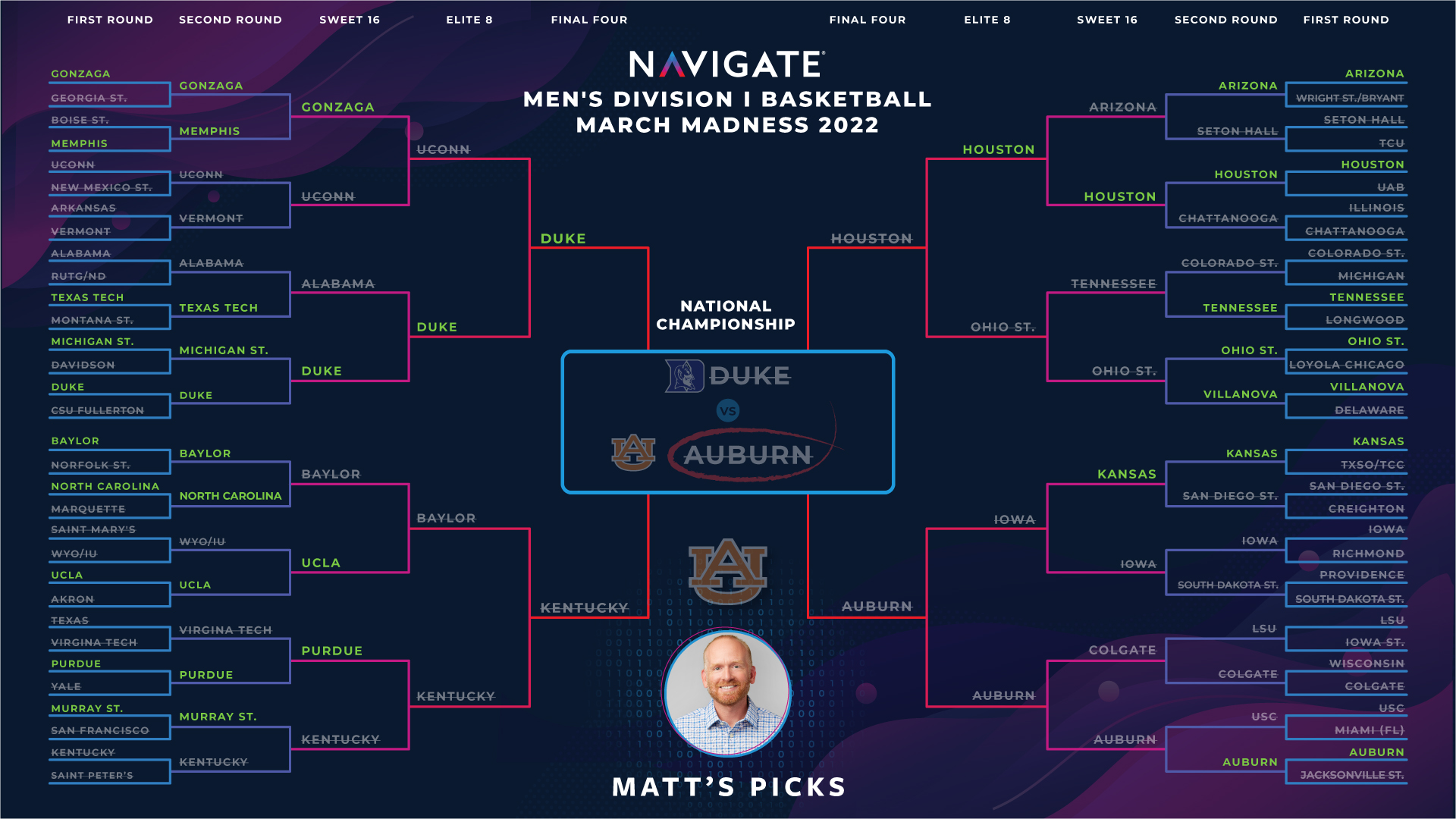 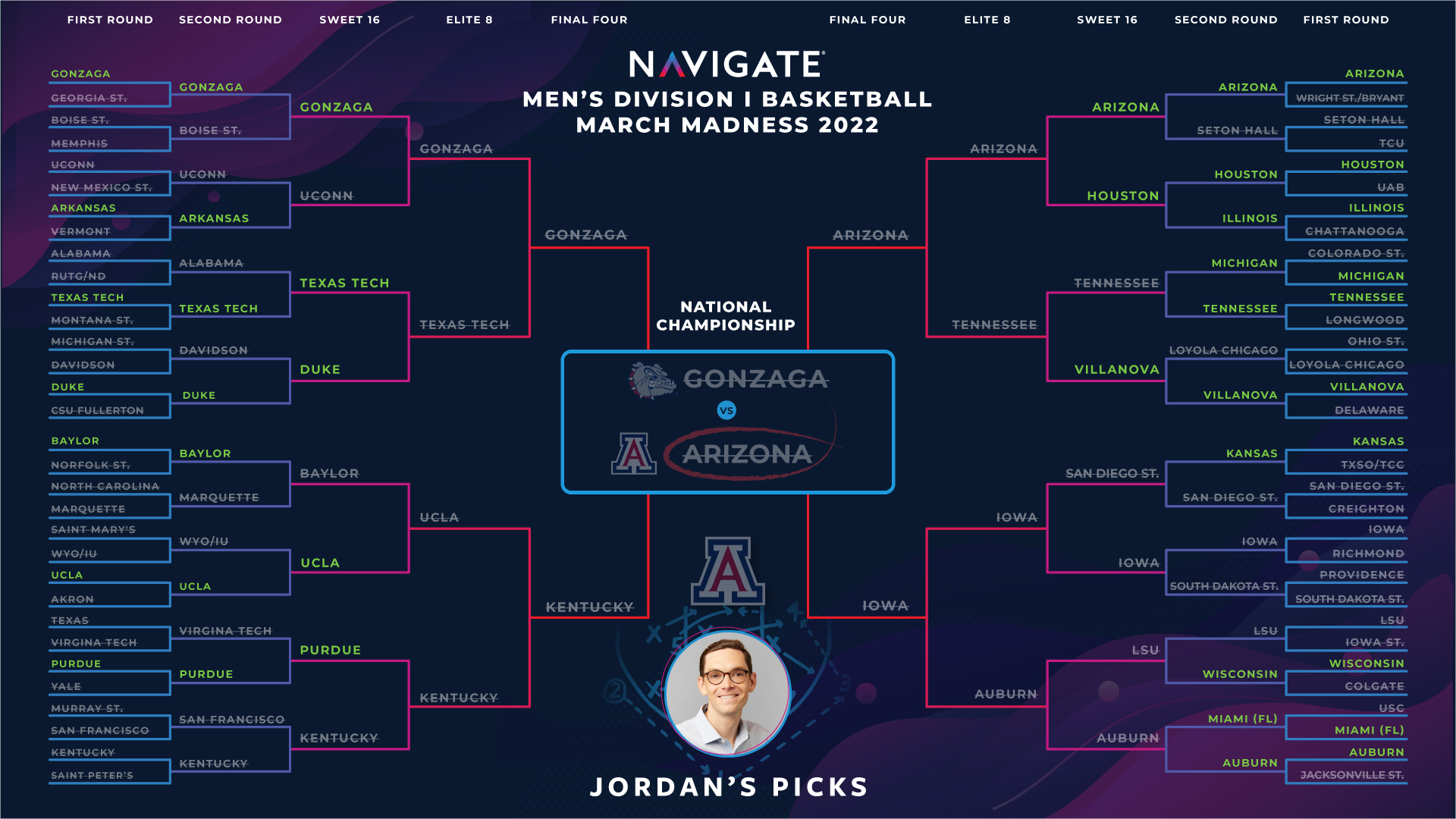 Despite Team Science’s big win, neither bracket had much success. This was in part due to the fact that this year’s tournament was uniquely unpredictable. On average, there are around 12 upsets per year in the men’s tournament, with an upset defined as a team winning that was a least 2 seed lines behind in the matchup (so a 9-seed beating an 8-seed doesn’t count). This year, there have been 18 upsets using that same definition.

The two teams that will play in tonight’s championship game, Kansas and North Carolina, were ranked #32 and #37, respectively, in Matt’s statistical model. Coming into the tournament, Kansas had weaknesses in 3PT attempts per game (20) and turnovers per game (13), but overcame both of those against Villanova with 24 3PT attempts and only 7 turnovers.

North Carolina’s weaknesses were steals, blocks and offensive rebounds, and while steals and blocks were still hard to come by against Duke, they had 70% more offensive rebounds than their season average (17 vs. 10), which made the difference.

Next year, Matt may consider looking at team ability to overcome weaknesses in the tournament compared to the regular season as another data angle.

Houston’s upset win over Arizona, and Duke’s trip the Final Four, were what really gave Matt the edge in total points over Jordan. Matt’s model liked Houston, largely due to their advantage over Arizona in steals and turnovers per game.

In the end, it seems that neither a hard analytical approach, nor an intuition-based process were effective when used individually. Perhaps next year, Matt and Jordan might find success with a hybrid approach. 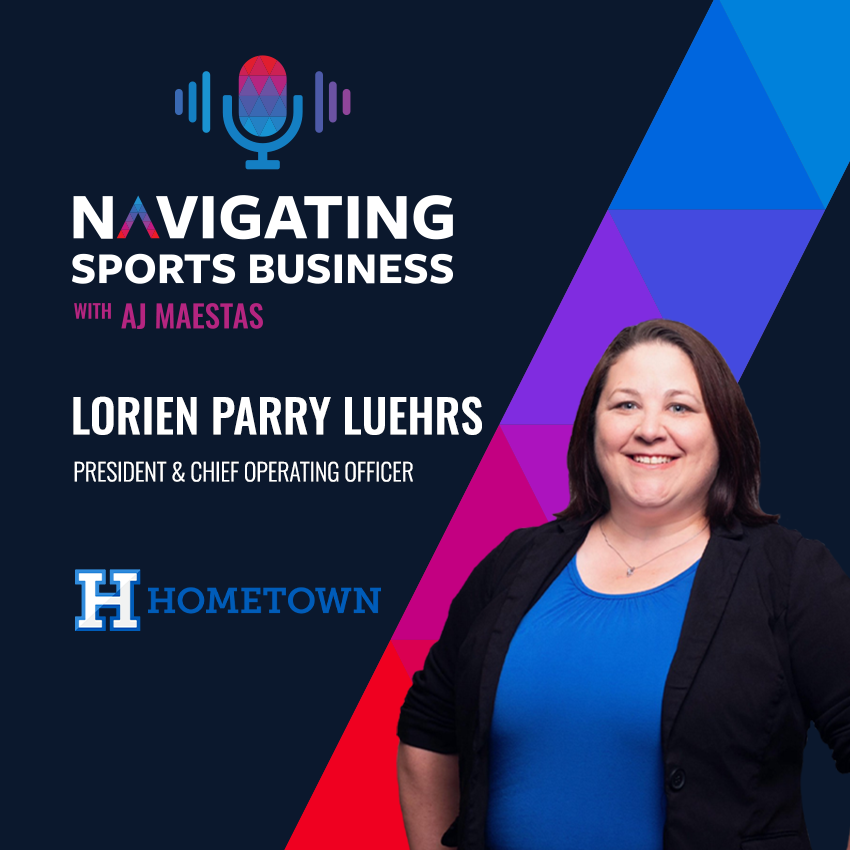 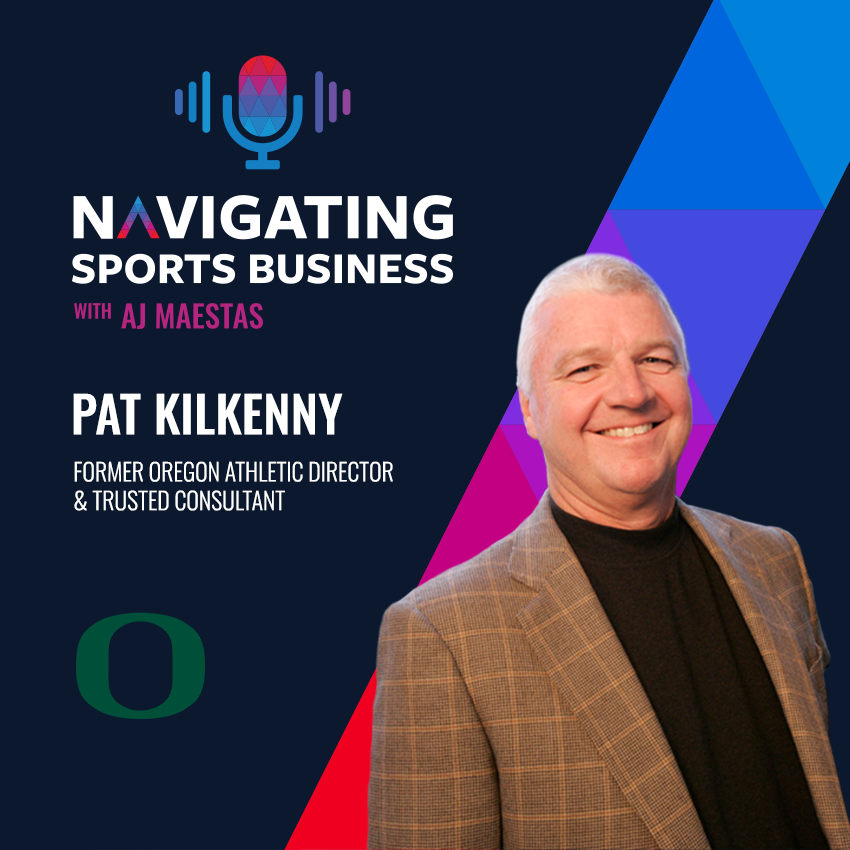 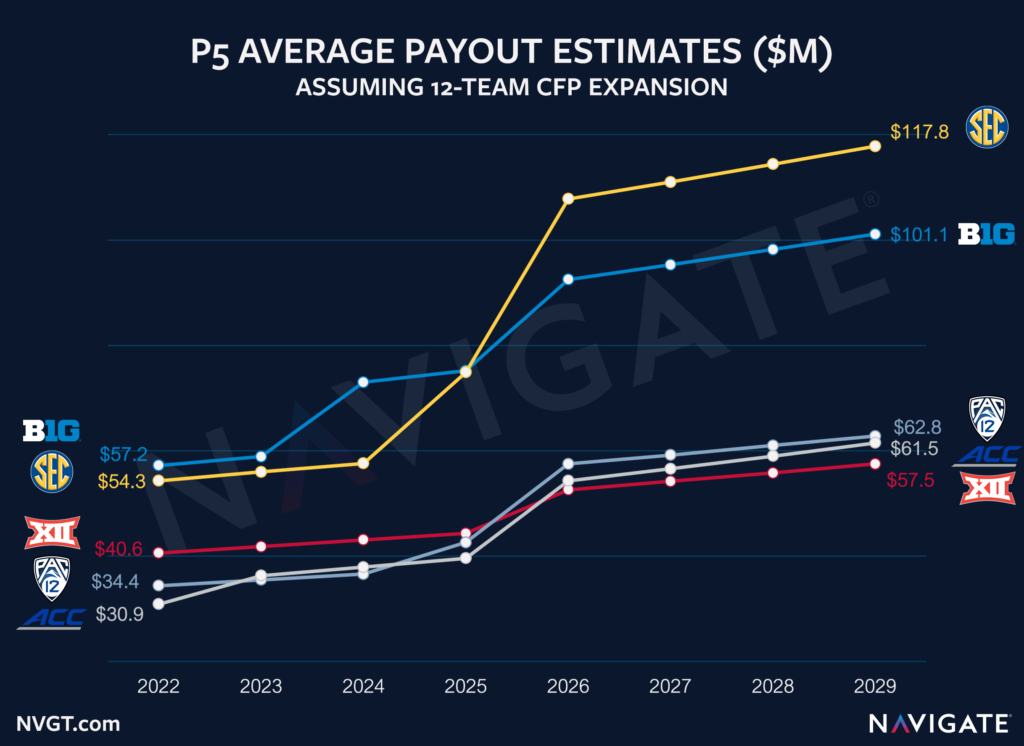 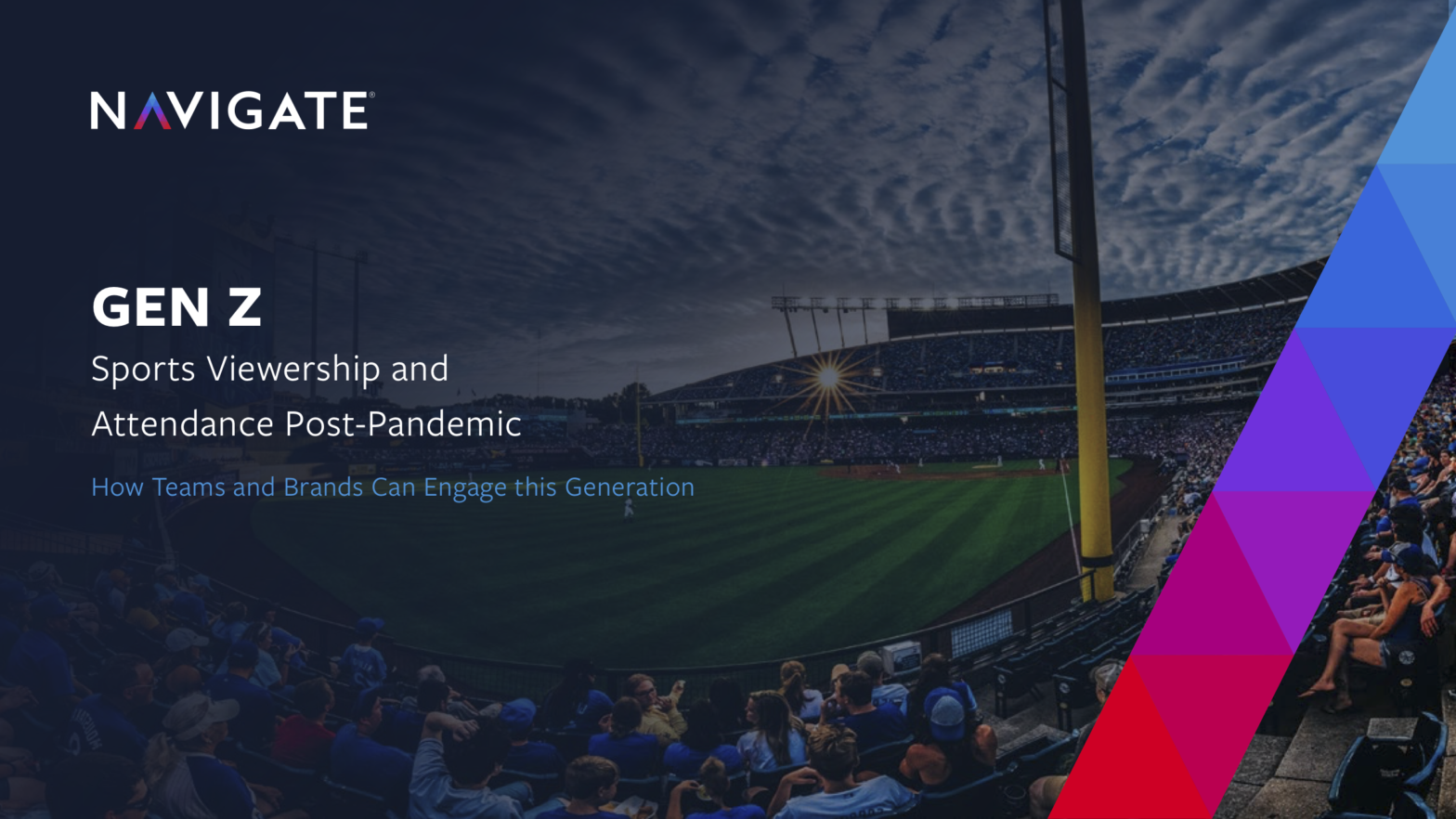