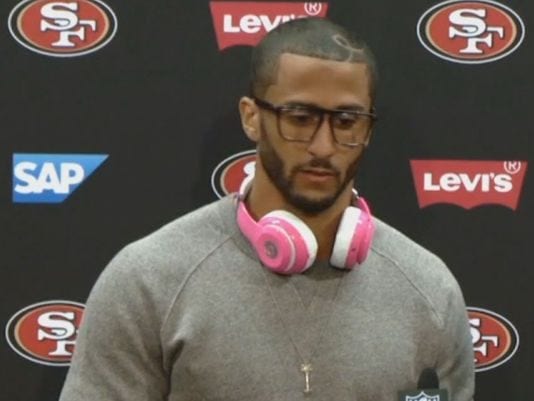 Each Monday, we will share some great activation practices throughout the sports and entertainment landscape. This blog will serve as a space to highlight innovative ideas and campaigns. Want to have your idea or campaign featured? Send us a note on Twitter at @Navigate_Res.

This week we take a look at a couple of NFL sponsorships in two emerging categories: Headphones & Tablets.

In April, Bose signed a four-year $32 million deal to be the Official Headphone provider of the NFL. Meaning, all of the coaching staff, players as well as the referees will have to wear Bose headphones whenever they are on the field, on the sidelines, in a press conference, and so on. This gives Bose excellent visibility and exposure both on and off the field. However, due to the competitive market and a number of players advertising for other brands, sometimes the non-sponsor ends up receiving unprompted exposure.

Colin Kaepernick wore Beats by Dre Headphones to a press conference and the NFL fined him $10,000 for that. This move, in turn, ended up drawing more attention to Beats rather than Bose. Beats by Dre, although not the official sponsor, received a large amount national attention and coverage over this, whether it was intentional or not.

Another occurrence of this is Apple gaining attention from Microsoft’s deal with the NFL. The NFL and Microsoft have a partnership in which their Surface tablets are used on the sidelines during games by players and coaches. Due to a lack of education and communication among the NFL, game broadcasters and Microsoft, the commentators have continually referred to the Surface tablets, as iPads, which they are not. Microsoft reportedly paid $400 million to be the NFL’s Official Sideline Technology Partner, but I wonder who has benefited more from that partnership.