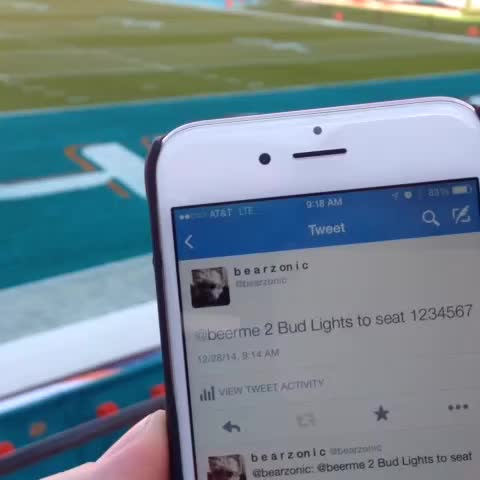 Each Monday, we will share some great activation practices throughout the sports and entertainment landscape. This blog will serve as a space to highlight innovative ideas and campaigns. Want to have your idea or campaign featured? Send us a note on Twitter at @Navigate_Res.

During the final game at Sun Life Stadium, the Miami Dolphins tested a new in-seat beer delivery system. Fans were able to tweet a message through the mobile app “Tweet-A-Beer,” to have a beer delivered to their seat. The Dolphins partnered with Anheuser-Busch, Twitter, their concessionaire Centerplate and tech company Appetize to create the unique marketing effort.

The program is still being rolled out, but during that final game against the Jets, fans in specific sections were able to tweet @beerme with their drink of choice and exact seat location. Hawkers then delivered a beer to that fan – right to their seat.

Centerplate had three hawkers who delivered the beers and fans were able to pay with either cash or credit card. There was no extra fee or charge for ordering your beer through Tweet-a-Beer, which made consumers very happy. @beerme’s Twitter timeline reflected nothing but positive feedback.

These in-stadium food and beverage delivery systems are becoming more and more popular among professional sports teams. The San Francisco 49ers and Levi’s Stadium rolled out a mobile app which allows fans to have food and drinks delivered to their seat. The Levi’s® Stadium mobile app not only works with concessions, but it’s also able to tell fans what bathroom line is the longest, or shortest.

These mobile apps are a great way to interact with your fans and consumers, so it’s not surprising that more apps are becoming available that are dedicated to providing fans with in-seat deliveries: Yorder,Bypass and Snagmobile are three of the most popular.

Stadiums are trying to become more of an all-around experience, rather than just a sporting event, and partnering with these fan-centered apps are a good way to get started.